How many of us have done this before?

I frequently find myself picking up others' discarded trash in order to dispose of it properly. Lazy assholes can't be bothered to do it themselves, so I'll do it for them, and silently direct invectives in their general (unknown) direction as I place the object in the correct receptacle.

Aside from picking up blatant asshole-deposited trash, how many of us have returned from a run carrying something more useful which we found lying on the road? I have come home with a wool U of M hat and a colorful tote bag.

The smorgasbord of clothing left behind at the start of major cool-weather races is a serious temptation, as are the innumerable hats, gloves, arm warmers and the like scattered on the road in the early miles of a race, but I do my best to refrain from picking up anything because I probably won't want to carry it for the next 24 miles.
Posted by Sun Runner at 11:21 AM 6 comments:

Email ThisBlogThis!Share to TwitterShare to FacebookShare to Pinterest
Labels: nothing in particular, thursday thoughts

Length of time spent staring at smudgy white patch of grass in my yard: 10 seconds

Back inside after realizing smudgy white patch of grass was actually a skunk: 5:29:10

Out the door a second time after turning on porch light to scare away skunk: 5:30

Times I had to stop and poop: 2 (once back at the house, once at a port-a-potty)

Sprinklers I ran through: 4 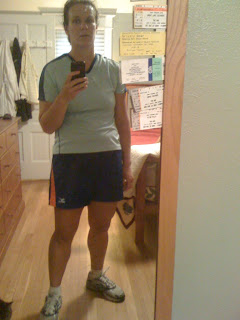 Post-run: Drenched from head to toe with sweat
Posted by Sun Runner at 10:47 AM 3 comments:

Yes, Chicago was the backdrop for my long run last weekend. I was there to attend the Wicker Park Fest with my man.

And here's my favorite song with "Chicago" in the title, from a band which I was able to see live two weeks ago.


17 miles on the schedule for Saturday on the Falling Waters Trail. That is, if the Redhead's leg gremlins allow her to run.
Posted by Sun Runner at 12:39 PM 3 comments:

If You Brew It They Will Come

I have no idea if the title of this post has been used as an advertising slogan, somewhere, sometime, but three rounds into my stint at the bar at Three Floyds Brewing in Munster, Indiana, I was suddenly struck by inspiration and I felt the need to announce this brilliant phrase of my own devising to my companion. Loudly.

In addition to Three Floyds, I also visited Bell's Eccentric Cafe, Two Brothers Brewing, and Old Hat Brewery. We probably would have stopped at Dark Horse Brewing, too, but it was too late.

It was an incredible weekend of new brew discoveries. The Ice Grille from Three Floyds was a delicious find.

But that's not what my weekend was about. It was about THE MOST AWESOME LONG RUN EVER! MYSTERY GUEST LOCATION REVEALED! (sort of.)

WHERE WAS SUN RUNNER?

I'm on a boat! OK, not really. I wish I was on that boat...with my nautical theme pashmina afghan.

Best picture of the set. If you can't figure it out by now...

Look closely: there is a dog on that custom trailer. He looked as if he were having the time of his life.

There was a major race (half marathon) going on. I inadvertently fell in with the racers around mile 2.5 of my run and hung with them for about 4 miles. Let me tell you all, that was a HUGE boost. Even though I wasn't racing, I had the benefit of the live entertainment and all the cheering. I did NOT take advantage of the multiple water/Gatorade stops and wet sponge handout. Hello, serious breach of runner etiquette! I refused to take what was not rightfully mine. I could wait for a water fountain (although the first two I tried to use didn't work, and that was a massive problem as I desperately needed water to wash down my Gu).
I ran 16 miles total in just over 2.5 hours. It was an incredible run. What a treat.

So, savvy readers, in which major U.S. city did I do my long run this past weekend? Facebook friends, keep out of this one! No fair spilling the beans!

I have another 8 miles on the schedule for tomorrow...must go to bed now...
Posted by Sun Runner at 9:34 PM 6 comments: