While I was out for a ten-mile run this morning, this handsome quartet crossed my path. 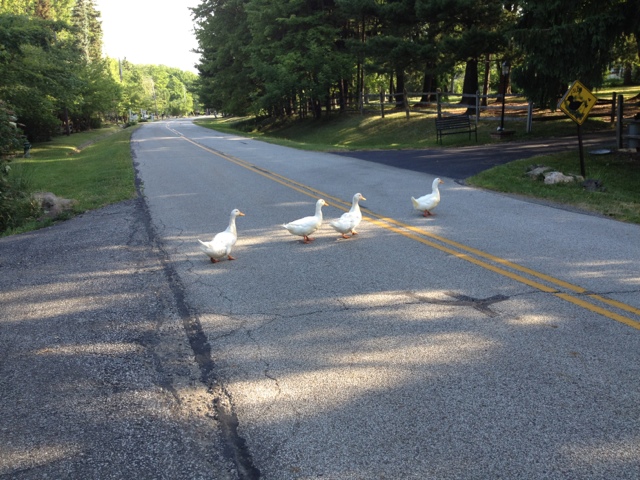 As many of you already know, I suffered a catastrophic injury during the Cleveland Half Marathon on May 15, 2011. The summer that followed was a complete wash, filled with no running, Frankenboot, and physical therapy. When I finally did resume running in August, it was as if the previous four years had never happened. I was literally back where I had begun--fitness-wise, weight-wise. It was a depressing few months as I struggled to rebuild my base and lose weight. I gradually rediscovered the joy of running, which culminated in The Streak: 13 straight days of running in late December-early January. Even though The Streak came to an end, it was enough. Enough to set me back on track and focused on a goal: to run another half marathon in the spring. I wanted to return to Cleveland to give that race a smackdown for what happened to me a year earlier, but it conflicted with my 15th college Reunion. I decided to run the Dexter-Ann Arbor Half Marathon instead.

I whipped up another spreadsheet based on Hal Higdon's Novice II half marathon training plan and got down to business at the end of March. Things moved along smoothly and I found myself doing unexpectedly well in a few local races, including one where I took home my first age group win in FOREVER.

I was feeling confident. My last two long runs were stellar and I was, like, "BRING IT" to the Dx-A2.

I was ready to give the finger to my calf injury, to last summer's lack of running, to Frankenboot, to weight gain, to the races I wanted to run but couldn't, to the runs where I felt like I was dying after two miles, to everything that brought me low over the previous year. I was ready for a comeback.

Race morning yesterday was crisp and dry. I was oh so thankful considering the weather a week earlier: 90 degrees and humid. I ran a bit on Sunday, Monday, and Tuesday and each run was like a waterlogged death march. I despaired that the weather for the half marathon would bring more of the same misery. Not so! 58 and clear were the order of the day.

A quick trip to Ann Arbor, park the car, hop on the bus, and 20 minutes later the Engineer and I were in Dexter almost an hour and a half early for the start of the race. A lot of sitting around ensued before we were ready to join the crowds at the start.

My strategy for the race was to join with the 2:05 pace group, stick with it as long as I could, and either fade back (boo) or stay fresh and finish under 2:05 (yay). I've never purposefully latched on to a pace group before, so this was new territory. The race got underway and I shuffled forward with the rest of the mob, finding my feet, easing into my stride, until I was cruising along at a nice comfortable pace. I forced myself to slow down and stay behind the pace group despite my legs wanting more. The sun played hide and seek behind some clouds, and the course rolled and dipped on the terrain adjacent to the Huron River. I managed the hills with less trouble than usual, and enjoyed the shade provided by the trees when it was available. The miles slid past effortlessly: 5, 6, 7, 8, 9...I drank Gatorade and poured water on my head, ate a couple of Gu packets...soon enough, we were at mile 10 and I thought, all right, let's see what's what and gave my legs a bit of gas. I moved in front of the pace group and that was the last time I saw them. At mile 12 as we rounded the sharp curve to the south and merged onto Main St., I said to the Engineer: "Here we go." One mile left, and most of it uphill. Time to see what my legs could do after running further than I had in a year. I pressed onward and the final half mile uphill loomed. I chugged along, and with the finish line banner in sight and about 400 meters to go my legs suddenly turned to mush and I felt as if I were being dragged down. Oh, for fuck's sake! I gritted my teeth and willed myself to put one foot in front of the other as the finish drew closer. And then it was over. Garmy said 2:04:22, so I had beaten my goal of 2:05. Even though my time was well off my best (1:43:01), I was happy. I had exceeded my goal and done better than I had in Cleveland a year ago.

Once the race was over, there was only one thing left to do:

Email ThisBlogThis!Share to TwitterShare to FacebookShare to Pinterest
Labels: half marathon, i run so i can drink beer, let's go racing
Newer Posts Older Posts Home
Subscribe to: Posts (Atom)