Run For the Rolls Redux

Ah, the Run for the Rolls. I love it so. What could be better than a one-mile sprint through my town with the promise of a bag full of delicious rolls as a prize? I have run this race since its inception in 2007 and last year I won the women's race in a then-personal-record time of 6:48.

I have been struggling since returning from vacation to recapture my running mojo, which seemed to be receding further into the horizon as I ran after it in vain. I forced myself out the door after work Wednesday for a brisk 5K through town which raised my spirits somewhat. Thursday I was the one doing the raising of the spirits as I joined 35 fellow runners on a 10K pub "crawl" run in Royal Oak and Ferndale. 6.2 miles, 6 different venues, and a lot of beer. It was fabulous! 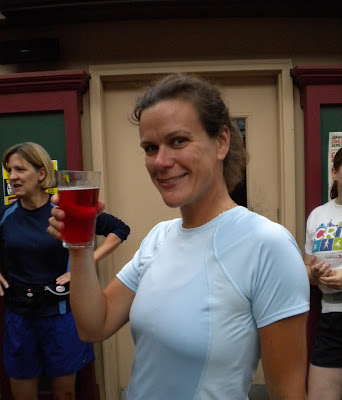 At the Royal Oak Brewery with my Michigan Cherry Ale. The first of many stops... 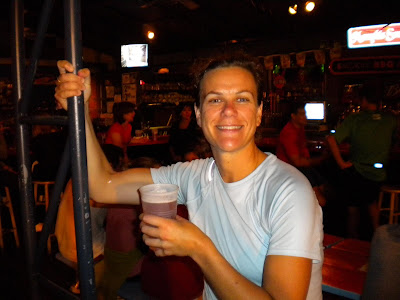 At Memphis Smoke Blues & BBQ in Royal Oak, our last stop. NO, I am not hanging on to that pole to keep from falling over!

The pub run did much to kick me out of my torpor since my trip. I was doing entirely too much moping and sighing and not running. The realization that the NYC Marathon is nine weeks from tomorrow also sent me into a bit of a panic and I knew the time for wallowing in post-vacation melancholy was over. I had to get my lazy butt back on track.

Thus, this morning I joined my RF501 group for my long run for the first time since July 25. I had 12 miles on tap (ha ha) and I wanted it to be a quality run. I settled into a steady groove and did the first six miles at an 8:55 average pace. After doubling back I decided to step it up, and did the last six miles at an 8:18 pace, including the last two miles at 7:57 and 7:52. I felt fantastic; all the lingering funk was swept away.

I had enough time to come home, have breakfast and coffee, watch some TV, and putter around the house a bit before walking to the start of the Run for the Rolls. Last year I pulled out a great time after running 18 miles in the morning. Today I had only run 12; could I better my time from last year? I wasn't expecting much, however, since my speed work has fallen off a cliff and I haven't done a circuit on the Oval of Doom since July 28. Oh well, just give it my best shot and see what happens. It's only a mile. And then I was off...running hard and fast. I felt okay, though. I was exerting myself, but I settled into a steady beat and pumped my arms and let the slight downhill on Main St. carry me along. Soon enough I made the turn for the homestretch and kicked it into a higher gear. The timing clock was obscured by something as I approached; I could see a "6" and nothing else. When I flashed past I saw it said "6:44." Holy shit! If that was true, I had just set a new mile PR. I knew I hadn't won the women's race because I could see three other women in front of me the whole way. However, I suspected I had a chance at an age group win and those sweet, sweet, delicious rolls. I waited around afterward, chatted with some fellow runners I know, and sure enough, I came away with the win in the 35-39 age group. My official time was indeed 6:44 (which was what Garmy had said, too). I was quite pleased.

I am now off to Ann Arbor for the long-awaited Great Lake Swimmers concert!
Posted by Sun Runner at 5:16 PM

Email ThisBlogThis!Share to TwitterShare to FacebookShare to Pinterest
Labels: i feel the need for speed, i run so i can drink beer, let's go racing, long runs

Nice job on the one mile race!

Very cool, but how come no pictures of the rolls?

That 10K sounds great. I might have to set one up out here.

Congrats on your new PR! Don't forget to update your PRs on the right hand pane. You are super fast!!

Congratulations on hanging onto your title and winning the yummy rolls (not that I've ever had them, I'm just assuming they're yummy :).

I came over from Boozehounds... Wow. that beer run sounds SO FUN! Why can't we have that in Maryland?

Good luck with the NYC marathon! It's a fun one. The best advice I got: when you run across the VN bridge in the beginning, if you're on the bottom level, STAY IN THE MIDDLE. men pee from the top over the sides! ;)

NO, I am not hanging on to that pole to keep from falling over!

Which leaves pole-dancing as the only explanation then.

Can't see your G-String in that pic - how many dollars did you have in it at that point?