I had no intention of running a race yesterday. None. Then one of my Thursday evening group run buddies started twisting my arm late Tuesday to run the race the next day, come on, it's just a 5K, I'll get you in for free, it will be fun, come onnnnn...

Thus, yesterday morning, I was thinking ahead when I packed a bag of running clothes to bring to work with me. The race was being held in the evening, which was unusual. I decided, oh, why not? and told my friend that I would do the race. I said I wanted to run close to 22:00; would he run with me? Push me a little? Of course; that's what running buddies are for.

After work I drove to Kensington Metropark to do four miles, which would double as a warm-up and an attempt to get in my scheduled 8 miles for the day. My "easy" warm-up started out with an 8:34 first mile. Whoops. I dialed it back after that but still finished with an 8:45/mile average. Then it was on to the race venue a short distance away.

I wore the shirt which I intend to wear for the Cleveland Marathon. I needed to identify any potential problems such as underarm chafage. I am happy to report I suffered no ill effects, so the top half of my race day outfit, at least, is settled. I will march through enemy territory with pride.

This was a small race, and my running buddy and I positioned ourselves close to the front of the crowd to ensure a good start. And then we were off. The course was a long out-and-back, and the first mile was a gentle downhill. When Garmy beeped at the one-mile mark, I peeked at him and saw to my surprise I had just run a 6:43 mile.

My fastest single mile ever. Even faster than my race-winning performance in the Run for the Rolls last summer.

Mile 2 passed in 7:13. I did a quick calculation and knew that with just under 14:00 for two miles, if I ran a solid sub-8:00 third mile and blazed to the finish, breaking my PR was a distinct possibility. I concentrated on putting forth a strong effort for the remainder of the race, though I was getting tired. The final quarter-mile was a gentle uphill, and I pushed as hard as I could. I saw the finish line clock just turning over to 22:00 as I approached and I thought, "Holy shit! I'm going to do it! Go, girl, go!" Garmy said "22:14" when I stopped him at the finish. I had done it: a new 5K PR by at least 16 seconds! When the results were posted a short time later, my official time was 22:13. Along with my shiny new PR I also placed first in my age group.

Not bad for a race I almost didn't run.

Afterward I joined another running buddy for dinner and gorged on chicken-broccoli pasta, two big glasses of Bell's Oberon, and a giant pile of ice cream. I earned it. 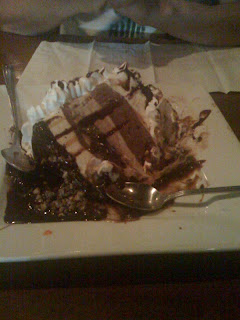 The aforementioned giant pile of ice cream.
Oh, about the title of this post. I have a runner friend (he's awesome; he just ran Boston) who is always telling me to respect the taper. We all know how difficult tapering can be. The reduced exercise leads to irritation, twitchiness, general malaise, etc. We find ourselves aching to get out and run, a few extra miles won't hurt, it won't matter...but it does. Practicing an improper taper can be damaging. Since I am, technically, in my taper period for Cleveland, I should maybe have thought twice about running a hard 5K two and a half weeks before my marathon. When I told him this morning about my successful race, he congratulated me and then, as always, added, "Respect the taper!" I said, "I am respecting the taper...with occasional lapses where I slap it around a little."

And it felt great.

Thanks to LO for convincing me to run the race, getting me into the race, and letting me chase him down; also to FK for bringing my attention to the existence of the giant pile of ice cream; AT for being the inspiration for the post title; and JF for the "who says marathon training can't equal 5K speed?" comment. You guys rock.

Email ThisBlogThis!Share to TwitterShare to FacebookShare to Pinterest
Labels: i feel the need for speed, let's go racing

Wow! That is fast!

Way to go! You continually amaze me. Had a funny thought after reading about your stats and calculations. There is too much math in running. lol

awsome first mile and way to go breaking both of your 5K prs! Now, respect the taper and as you get ready for Cleveland.*

*thought, if I said that, it would help me run Boston.

You are a FAST woman. Way to go on that PR!

No more taper abuse though, okay? Not even the heat-of-the-moment kind...

That is awesome! Congrats!

Great to read, congrats on breaking your Thursday night racing virginity and the PR.

first in ag? sweet! nice job, sister. a pr is always a good thing, even if it is during a taper.

Congratulations! This should fuel your confidence for Cleveland even more!

Good work slapping that taper around!

That's an amazing time, and how cool, an Age group ace!